Sale on canvas prints! Use code ABCXYZ at checkout for a special discount!

Sometimes things just happen during a painting. This was originally going to be called “Evening Falls” and was based on a painting by Benjamin Williams Leader RA as part of my ‘Inspiration’ series. A typical late Victorian scene it had all the classic ‘Leader’ ingredients – an old church in a rural setting with wet tracks and imposing trees. In my pencil sketch I added some gravestones dotted around the churchyard but when I painted them something strange happened – one of the gravestones mysteriously took on human form. This old lady appeared. She was walking away from the church. Had she been inside or perhaps putting flowers on a loved one’s grave? You will have to decide but for me she perfectly epitomised the lonely lady in the immortal Beatles Classic – Eleanor Rigby. I had to leave her in of course and changed the title of the painting. I bet you are humming the tune already!

Just down the road from where I used to live near York is a wonderful little Yorkshire nature reserve called Moorlands. Initially part of the grounds of a large house it is a perfectly preserved and well maintained Edwardian garden. Its main attraction is the spectacular collection of rhododendrons and maple trees. It is criss-crossed with delightful little paths each containing spectacular views particularly in May/June when the rhododendrons are in full bloom. But I was just as interested in the tall sycamores that graced the entrance to the garden proper. We would just have a wander on many mornings on our way to work at Gallery 49 in Bridlington. You could easily get round it in twenty minutes or so and you were set up for the rest of the day. This was an autumn day and the view before me as we were leaving the garden was amazing. The sun was just beginning to melt away the mist and it was absolutely certain that a glorious autumn day would ensue. I am certain you will agree with me that this beautiful scene just had to be painted. The challenge then was how to do it justice. There are quite a few techniques involved. First of all I used masking fluid on the brightest fallen leaves shapes. Next I just ‘spattered’ some drops of masking fluid randomly so that whatever happened I would have some light in the painting. The background is classic ‘wet in wet’- just dropping yellows and blues onto very wet paper and letting them come together. There was a bit of white paper showing but I left that alone as it added to the light effect. Then I painted all the trees before starting on the carpet of fallen leaves. Remember I had already masked some leaf shapes so now I used the wet on wet technique on the ground but this time using reds, browns and yellows. When it was dry (and it must be completely dry!) I ‘masked’ in some more leaf shapes and repeated the wet in wet again, then more leaf shapes with masking fluid and a final wash. When you remove the masking fluid you will find all these different coloured fallen leaves to make up a very realistic looking autumn carpet. That just left the light rays. I use transparent paint so I knew I could wash out the rays but I would have to be very careful. The rays all had the same source - the sun – and some went behind trees and some went in front of other trees but it was worth the effort because I think it turned out OK. Whenever I look at this painting it brings back happy memories of a lovely walk on an autumn day.

Welcome to the Yorkshire Wolds 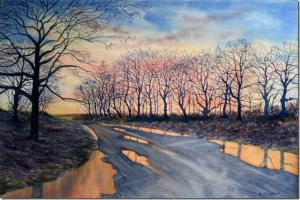 I am so fortunate to live where I do. Situated on the Coast I am on the very eastern edge of the Yorkshire Wolds...in fact you can't get any further east without falling off the cliffs!
The Wolds are quietly unassuming unlike their more well known cousins- The Yorkshire Dales or the North Yorkshire Moors. You can still wander peacefully through its gentle undulating 'wolds' dotted with picturesque little villages without any of the crowds associated with tourist destinations. I hope you enjoy my little tour until you can get here yourself.

Got to do two watercolour commissions, an iPad painting, and design a character for a children's book....all before the end of October!